The University of Western Australia (UWA) was established in 1911 as the State’s first university. It was also the first free university in the British Empire, actively promoting equal access to tertiary education for all social classes.

There was consensus among legislators of the time that the University not only be free, but also provide tertiary education of a practical nature to help develop Western Australia’s pioneering economy. At the time of the University’s foundation, Perth’s population was just 121,000 and its economy relied mostly on agricultural, pastoral and mining industries. As a result, the founding professorial appointments were in Agriculture, Mining and Engineering, Geology, Mathematics and Physics, Chemistry, History and Economics, Biology, and English. These were balanced to an extent by the appointment of lecturers in Classics and Ancient History, French, German, Mental and Moral Philosophy, and Veterinary Science. Overarching these 12 posts were three faculties – Engineering, Science and Arts. 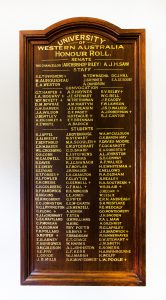 Roll of Honour Board UWA