The University of Tasmania (UTAS) was founded in 1890 as the fourth university to be established in Australia, although Christ College>>, which became affiliated with the university in 1929, was established in 1846 and remains the oldest form of higher education in the country.

The university’s Honour Board lists 118 surnames and initials of students, staff and graduates who served in the first world war. To date, two have been identified as women – sisters, Janet Ella Radcliffe and Helen Cicley (Cecily) Radcliffe. Both women matriculated to the university in 1905 & 1906 respectively but are not listed as graduates.

Janet served in the war as a nurse and worked alongside Sister Alice Gordon King from their time of embarkation.  Sister Janet Radcliff  was mentioned in dispatches in September 1916, for her  hospital work  under  dangerous conditions  at Abbeville.  She  finally returned to Tasmania  in March 1919,  discharged  due to ill-health after serving throughout the war. She died the following year, aged 39.

Helen served as a nurse and masseuse and after the war was a leading figure in the professionalisation of what we now call Physiotherapy. She was awarded the honour M.B.E. in 1951 for her continued dedication to hospital work.

If you have more information about these women or others from the university who gave service in the first world war please contact the Senior Research Officer at expert.nation@sydney.edu.au 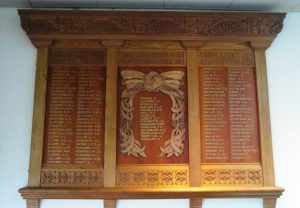 WWI Honour Board – University of Tasmania