The University of Queensland was officially founded on April 16, 1910. Teaching started in 1911 in Old Government House in George Street, Brisbane. In the first year there were three faculties – Arts, Science and Engineering – and 83 students (60 men and 23 women).

During the First World War, of the 263 staff and students, 154 members of the  university served in the armed forces. Another 17 were engaged on munitions or Red Cross work and 5 on home service work. A total of 33 men were killed. Their names are listed on the Honour Roll in the Forgan Smith building, pictured below. 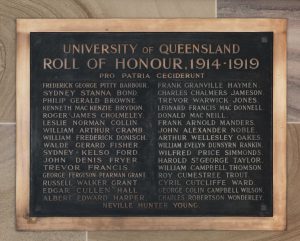 The history of UQ Gatton dates back to 1897, when the Queensland Agricultural College (QAC) opened as a combined agricultural college and experimental farm. This concluded a 20-year debate by farmers and politicians on ways to boost agricultural production in Queensland.

Growth was slow due to events such as World War I and the Government transferred control to the Department of Public Instruction (now the Department of Education) in 1923 and the institution was reborn as Queensland Agricultural High School and College.

Over the years the College would evolve from a high school, to a U.S. Army General Hospital, a college of advanced education and finally a Campus of The University of Queensland.