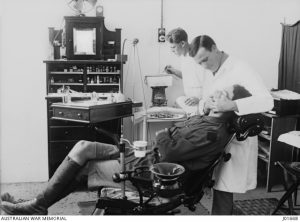 When war broke out in 1914, dentistry was still embroiled in bitter conflicts between interest groups with different understandings of the social status of the profession and the relationship of universities to it. But the wartime experience of solider dentists left them in no doubt about these questions. For dentistry, as for so many other branches of science, the war functioned as a ‘huge laboratory of deadly trial and error’ (Macleod, 1993, pp. 455-456). It brought into being new treatment processes, new surgical practices, and new forms of equipment, and it brought into the dentists’ chair an enormous number of new patients, many of whom had previously received little or no dental care. At the same time it mobilised a previously divided profession behind a common cause, elevating it to a science on par with medicine through the recognition of university level training. At the end of the conflict many members of the profession tried to put these lessons into effect, yet the incumbency of an older culture of profit and expectation meant that their struggle to do so continued throughout the 1920s.

From an article by Tamson Pietsch, Universities, war and the professionalization of dentistry, History of Education Review 2016 45:2 , 168-182